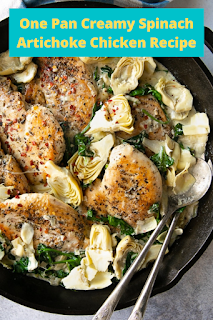 have not had a good spinach & artichoke dip in AGES! Years ago I had one of the BEST ones at a restaurant in Delaware that has since closed. It was soo creamy without feeling incredibly heavy. It had the sauciness of a delicious smooth alfredo sauce- and you could tell the artichokes and spinach were super fresh. I miss it so much!!

With that said, I wanted to make an everyday version of spinach & artichoke dip so decided to turn it into a one pan skillet with some chicken- to make for a complete and quick weeknight meal.

My favorite part about this recipe?

It gets made in ONE PAN!!! This almost never happens for me but I was amazed at how quick and easy this dinner was and how I didn’t spend more than 15 minutes cleaning up!

Made with simple and delicious ingredients like artichoke hearts and fresh baby spinach, this Creamy Spinach Artichoke Chicken is cooked in one pan and comes together in just 30 minutes.

One, Prepare the chicken - Transfer chicken breasts to a large mixing bowl. Drizzle with approximately 1 tablespoon of olive oil and season with salt, pepper, and Italian seasoning, mixing well to coat the entire surface of each chicken breast.

Two, Cook the chicken - Heat a large skillet over medium-high heat. When the pan is hot, drizzle with approximately 1 tablespoon of olive oil and swirl to coat the bottom of the pan. Work in batches, if needed (it took me two rounds to cook the 6 chicken breasts), to cook the chicken until golden, approximately 5-6 minutes per side, (or until nearly cooked through (see notes)). Remove chicken from the skillet and set aside.

Three, Make the Sauce - Return the skillet to medium heat. Add the butter and shallots and sauté for 2-3 minutes, stirring often. Add the minced garlic and stir continuously for 30 seconds more. Mix in the artichoke hearts, fresh spinach, and chicken broth. Mix well to combine. Cook until the spinach has just wilted. Add the half-and-half and bring just to a simmer. Stir in the mozzarella cheese.

Five, Garnish and serve - Sprinkle with the shredded Parmesan cheese and additional salt and pepper, to taste. Garnish with fresh chopped parsley and crushed red pepper, if desired.