How to Turn off Force Hp Hang battery

10 Sep, 2019 Post a Comment
Have Hp had friends hang, stuck, bootloop or any other problem whether it is playing games or internet-conditioned, so we are forced to turn off the Hp?

For friends of Hp users with batteries that have not planted problems on the resolution is quite easy, just remove the battery and then install it again to turn on. But for Hp users with planted batteries should have extra knowledge, how to turn off the Hp forcibly and not only wait for hours until the battery power is exhausted so that Hp can die itself.

Almost all of the latest HP expenditures use a battery-planting or unibody system, i.e. the battery is already fused to the machine with cable or flexible as its attachment tool. Battery type of planting does have its own advantages, for example the battery has a larger capacity, battery life is usually more durable, it is easier to change the SIM card because we do not have to remove the battery in the thirst.

In addition to having an excess of the planting battery also has a shortage, for example if experiencing damage we can not directly replace it and must be a member who handles it, battery parts are difficult to find, Hp easy to heat because the battery Really stuck on the machine and there is one more problem that is actually trivial but need special knowledge for battery users planting, ie when the Hp is in a state hangs, stuck, blank and bootloop battery can not be lifted to shut down the Hp forcibly.

For friends of Hp users with planted batteries if not yet know how to turn off forced Hp with battery cropping can see my tutorial below.

How to shut down Hp battery cropping 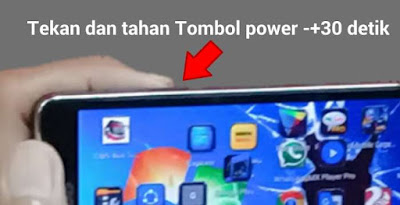 Normal function (not hang or stuck) power button is to turn on and off Hp, if HP in Live State button will serve as Hp lock key or if we press and hold for a few seconds will generally appear new option To turn off Hp, restart Hp and to airplane mode.

But if Hp hangs or gets stuck, the power button will automatically switch the function can be used to shut down the Hp forcibly. By the way press the power button for approximately 30 seconds, this way works in almost all Android devices and tablets and on all Hp brands.

Since maybe some of the Hp does not work in the first way, friends can combine the power button with the Tombal volume up navigation or volume down way.

From the second way this is not all Hp will die forcefully, but there are some hp that just restarts.

How easy is it? You don't have to wait for the hours to turn off the Hp hang that uses the cropping battery, with the tutorial I've given just a few seconds. Thank you and if any less understanding can be asked in the comments.